17 December 2007 - Yet Another Brazilian Hat-Trick 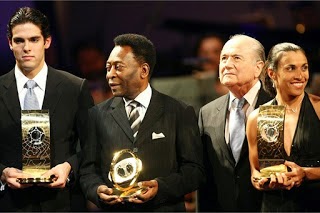 Earlier that year, Kaká led AC Milan to the 2006-07 Champions League title, finishing as the tournament's top scorer with 10 goals. Marta, meanwhile, had helped her club, Swedish side Umeå IK, claim a double, winning both the league and the Swedish Cup. She also led them to that year's UEFA Women's Cup Final, where they lost to Arsenal LFC, 1-0.
The 2007 award was the second consecutive Player of the Year award for Marta, who won it a third time in 2008.
Brazil walked away with a total of three honors, as FIFA conferred the 2007 Presidential Award on Pelé for his years of service to the game.
Posted by Brian Seal at 12:01 AM