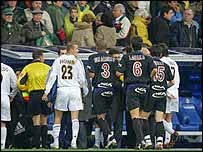 On 12 December 2004, Spanish authorities evacuated Real Madrid's Santiago Bernabéu Stadium in response to a bomb threat from the Basque terrorist group ETA.Real were nearing the end of their match against Real Sociedad with the score tied at 1-1 when, three minutes from time, officials stopped the match and directed the 70,000 fans in attendance to exit the stadium. It was the first time that a major Spanish sporting event was interrupted due to terrorist activity, but the second time that the Bernabéu itself had been targeted by ETA, who exploded a bomb outside the stadium before a Champions League match in May 2002. This time, fortunately, no bomb exploded, nor was anyone injured as the crowd exited the stadium. ETA, which stands for Euskadi Ta Askatasuna ("Basque Homeland and Freedom"), is a Basque separatist organization with a violent history, claiming responsibility for 800 deaths since 1968. Real Sociedad is located in the Basque city of San Sabastián, which may be why their match against Real Madrid was targeted.

Police searched the stadium for hours, but never found a bomb. The match was replayed on 5 January 2005, with Real Madrid earning a 2-1 victory.
Posted by Brian Seal at 12:01 AM