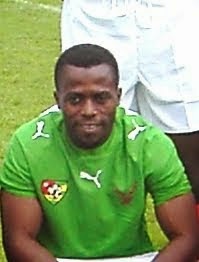 On 8 October 2005, African qualification for the 2006 FIFA World Cup came to an exciting conclusion, as four nations secured spots for their first-ever World Cup Finals on the final day.

In Group 1, Togo came from behind twice to defeat Congo 2-3 in Brazzaville. Forward Mohamed Kader (pictured) scored the 70th minute matchwinner after netting an equalizer in the 60th minute. The win put Togo two points clear of Senegal at the top of the table.


Ghana, who needed only a draw to secure their first World Cup berth, topped Group 2 with an 0-4 away drubbing of Cape Verde. The win sent them five points clear of both Congo and South Africa, who played to a 2-2 draw on the final day.


Group 3 was won by Côte d'Ivoire with a 1-3 away win at Sudan. They finished one point ahead of Cameroon, who drew 1-1 at home against Egypt after Cameroonian back Pierre Wome failed to convert a penalty kick in added time, hitting the outside of the post.


Angola guaranteed their trip to Germany with a 0-1 away victory over Group 4 bottom-dwellers Rwanda. The win put Angola level on points with group favorites Nigeria, but Angola advanced on their head-to-head record, having earned a win and a draw against Nigeria earlier in qualification.


The four debutants were joined in the World Cup by Group 5 winners Tunisia, who were making their fourth appearance in the tournament. Of the five African sides, only Ghana advanced out of the group stages with wins over the Czech Republic (2-0) and the United States (2-1), but then fell to Brazil in the first knockout round.
Posted by Brian Seal at 12:01 AM