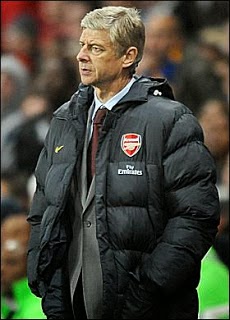 On 1 October 1996, Arsène Wenger officially took charge as manager of Arsenal. He would go on to become recognized as one of the best managers in football, becoming the first (and to date only) non-British manager to win the English Double and the first Premier League manager to go a full season undefeated.

Wenger was born in Strasbourg, France on 22 October 1949. He enjoyed a brief and undistinguished playing career as a sweeper for FC Mulhouse (1973-75), ASPV Strasbourg (1975-78), and RC Strasbourg (1978-81) before moving into management as an assistant with AS Cannes in 1983.
He received his first full mangerial position with Ligue 1 side AS Nancy in 1984. He stayed there for only three seasons, the last of which ended with the club being relegated to Ligue 2. In 1987, he moved to AS Monaco, where he earned his first managerial honors, winning Ligue 1 in his first season. His Monaco side also won the Coupe de France in 1991.
Wenger left Monaco in 1994 after the club's board denied him permission to speak with Bayern Munich about their managerial vacancy. In 1995, he went to Japan to manage Nagoya Grampus Eight and in 1996 his side won both the Emperor's Cup and the J-League Super Cup.
He moved to Arsenal in 1996 after the London club sacked previous manager Bruce Rioch. His first match in charge was a 2-0 Premier League away win over Blackburn Rovers on 12 October 1996. Arsenal finished in third place that season, but secured Wenger's record-setting Double the following season, winning both the Premier League and the FA Cup in his first full season in charge.
He won a second Double in the 2001-02 season, then won the league again in 2003-04 without losing a match.
Posted by Brian Seal at 12:01 AM