27 October 2005 - England Does Not Suffer From Triskaidekaphobia 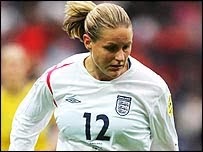 
The two sides met in Tapolca, Hungary for their second match in UEFA Group 5. Coincidentally, both teams' previous match had been against Austria, with England emerging 1-4 victors and Hungary losing 0-3.
Against Hungary, England got off to a quick start with a 3rd minute goal from striker Kelly Smith (pictured) and another in the 5th minute from midfielder Rachel Yankey. Both Smith and Yankey had started their careers with Arsenal Ladies, whom they had recently rejoined after brief spells with the New Jersey Wildcats in the USL W-League.
The match against Hungary was completely one-sided from start to finish, with a total of eight English players finding the back of the net: Smith (3', 43', 80'), Yankey (5'), forward Eniola Aluko (12', 50'), full back/winger Alex Scott (15', 38'), midfielder Katie Chapman (30'), midfielder Fara Williams (61', 88'), substitute Jo Potter (75'), and striker Jody Handley (79').
The teams finished qualification at opposite ends of the table, with England on top and Hungary at the bottom. England advanced to the 2007 World Cup quarterfinals, where they were eliminated by the United States.

The win against Hungary set the largest margin of victory in the history of the English women's team (and tied the record scoreline for the English men's team, who defeated Ireland 0-13 in Belfast on 18 February 1882).
Posted by Brian Seal at 12:01 AM