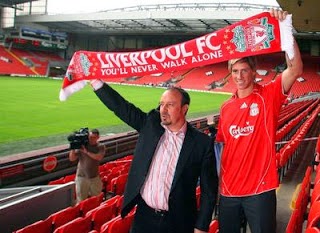 On 4 September 2007, Deloitte announced that English transfer spending for the 2007 summer window exceeded £500 million, up from £300 million the previous summer. The figure includes spending for the Premier League and all three levels of the Football League. Manchester United spent the most at £51 million, with Liverpool a close second at £50 million. Tottenham was a surprising third at £40 million, while newly-promoted Sunderland was fourth at £35 million.


More than half of Manchester United's fees--£30 million--went to Porto in exchange for midfielder Anderson and winger Nani. They also signed midfielder Owen Hargreaves from Bayern Munich for £17 million.
Liverpool's major signing was striker Fernando Torres, whom they prised from Atlético Madrid for an undisclosed fee believed to be over £20 million, making Torres the most expensive signing in England that summer. They also pulled winger Ryan Babel from Ajax for £11.5 million and midfielder Yossi Benayoun from West Ham for £5 million.
Tottenham's most expensive purchase was striker Darren Bent, whom they acquired from Charlton Athletic for £16.5 million. Spurs also brought in midfielder/back Younes Kaboul from Auxerre for £7 million and left back Gareth Bale from Southampton for £5 million.
Sunderland brought keeper Craig Gordon in from Hearts for £9 million, striker Kenwyne Jones from Southampton for £6 million, striker Michael Chopra from Cardiff City for £5 million and midfielder Kieran Richardson from Manchester United for £5.5 million.
The results on the pitch for those four clubs were mixed. United won its second consecutive Premier League title, with Anderson, Nani, and Hargreaves each playing significant roles. Liverpool finished fourth, with Torres contributing 15 League goals.
Spurs, on the other hand, failed in their push for a top-4 finish, ending the season in 11th place. Darren Bent lasted only two season at White Hart Lane before transferring to Sunderland in the summer of 2009 for an initial fee of £10 million, with clauses that could raise the value to £16.5 million.
Sunderland achieved their primary goal of avoiding relegation, finishing 15th, and have remained in the Premier League since.
Posted by Brian Seal at 12:01 AM