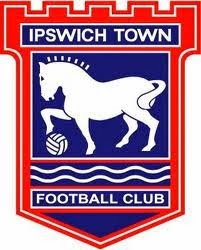 On 25 September 1962, Ipswich Town defeated Maltese champions Floriana 10-0 in the second leg of the European Cup's first round.

Ipswich qualified for the 1962-63 European Cup by winning the Division One title the previous season--their first season in the English top flight. Their rise to glory was orchestrated by manager Alf Ramsey, who had taken over in August 1955 when the club were in Division Three. He stayed with the club until April 1963, when he left to manage the English national team.
In Malta one week earlier for first leg, Ipswich had won 1-4, so the second leg appeared to be a mere formality. Ipswich dominated the Maltese side from the start, however, going ahead 1-0 with an 8th-minute goal from inside forward Douglas Moran. By halftime, the score was 6-0, with two goals from striker Edward Phillips (14', 34' (pen)) and a hat-trick from striker Raymond Crawford (28', 39', 44'). Moran added another in the 52nd minute, as did wing-half John Elsworthy (54'), while Crawford contributed a second-half brace (60', 80').
The 10-0 demolition sent them into the European Cup second round with the aggregate score of 14-1. There, they met eventual champions Milan, who eliminated them 4-2 on aggregate. Crawford scored in the second leg, a 2-1 Ipswich win, giving him a total of 8 goals. Although he played in only the first two rounds, that tally ranked him as the third-highest goalscorer for that year's competition.
The 10-0 win remains Ipswich's largest margin of victory in any competition. The club currently plays in the English second division.
Posted by Brian Seal at 12:01 AM