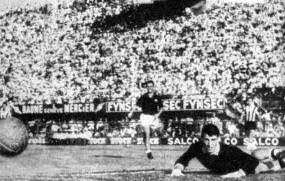 On 24 September 1961, 19-year old Italian goalkeeper Dino Zoff made his Serie A debut with Udinese in a 5-2 loss to Fiorentina. He made only four appearances for Udinese in the 1961-62 season, which ended in relegation for the club.

After a season in Serie B with Udinese, he moved to back to Serie A in 1963 with Montova, who were themselves relegated in 1965 and then promoted back to Serie A in 1966. He moved to Napoli for five seasons (1967-72) before finally settling with Juventus.
He played 11 seasons for the Bianconeri, winning six Scudettos, two Coppa Italia trophies, and the 1977 UEFA Cup Final. He also earned honors with the Italian national team, winning the 1968 UEFA European Championship and captaining the Azzurri to a 3-1 win over West Germany in the 1982 World Cup Final. He was 40 at the time, making him the oldest person to win the Jules Rimet Trophy.
He retired from playing in 1983 after making 330 Serie A appearances with Juventus.
Posted by Brian Seal at 12:01 AM