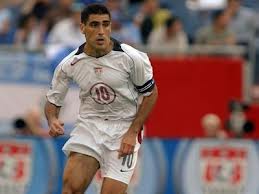 After playing under Bruce Arena at the University of Virginia, the midfielder started his professional career in 1994 with Bayer Leverkusen, but went on loan to Wolfsburg from 1997 to 1999, where he became the first American to captain a European side.

He signed with Rangers in 1999 and went on to win both the league and the Scottish Cup in his first season before moving soon afterward to Sunderland (2001-2003). He then transferred to Manchester City, where he enjoyed his longest tenure, making a total of 87 appearances in four seasons.

In the meantime, he earned 111 caps between 1994 and 2006 and played in three World Cups. he captained the team in the 2002 and 2006 tournaments and was named to the all-tournament team in the former after helping the US reach the quarterfinals.

His final stop was with the New York Red Bulls, but injuries cut his career short just a few games into his second season.