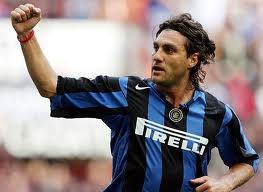 In a career that spanned from 1991 to 2009, Vieri played for thirteen different teams in Italy, Spain, and France (technically, Monaco, but in the French league), generally staying no more than a single season at each one. The lone exceptions were Torino, where he made nine appearances in his first two seasons as a professional, and Inter, where he remained for an unprecedented six seasons, making 190 appearances and scoring 123 goals.

After winning the La Liga scoring title with Atlético Madrid in 1997-98, he moved to Lazio and won the 1999 Cup Winners' Cup. That attracted the interest of Inter president Massimo Moratti, who paid a then-record £32MM for his services. (Coincidentally, it was Lazio who broke the record in 2000 by giving £35.5 MM to Parma for Hernán Crespo).

He left Inter for Milan in 2005, but suffered a knee injury shortly afterward and made only 14 appearances before moving to Monaco in early 2006. He finished his career with Atalanta in 2009, having played there before in two different spells.