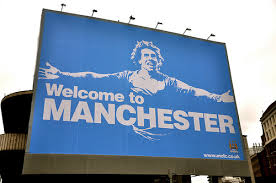 On 14 July 2009, Carlos Tévez switched sides in Manchester, leaving United to sign for City in a deal worth £25.5 million.


The Argentinian forward had joined United on loan from West Ham two years earlier. Over the course of those two seasons, he scored made 99 appearances across all competitions, scoring 34 goals and winning two Premier League titles, the Champions League, and the FIFA Club World Cup.

At the expiration of his two-year loan, United offered him a permanent deal, but Tévez had grown frustrated with a perceived lack of playing time and declined the offer, instead signing with United's rivals, City.

He spent four years at Manchester City where he scored 73 goals in 138 appearances and won the 2011 FA Cup and 2012 league title. His success was overshadowed, however, by a lengthy suspension in the middle of the 2011-12 season after he refused to come on as a late substitute in a Champions League match against Bayern Munich.