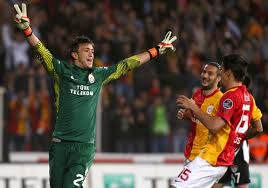 On 8 April 2012, goalkeeper Fernando Muslera scored the first goal of his career as Galatasaray routed Manisapor 0-4 on the last day of the season.

Galatasaray entered the match as league champions, starting the day six points clear of runners-up Fenerbahçe, who had already completed the season. Manisaspor, meanwhile, were guaranteed to finish seventeenth out of eighteen teams regardless of the result of their last game. So neither team had much to play for and the first 45 minutes reflected that. The only event of note in the first half was the 39th-minute ejection of Manisaspor midfielder Yiğit İncedemir after he received a second yellow.

Playing down a man, the hosts could not keep up with the title winners, who took the lead with a penalty kick from Selçuk İnan two minutes after the restart. He added another in the 77th minute to effectively seal the win, then had the opportunity for a hat-trick when the referee awarded another penalty to Galatasaray in the 83rd minute. But rather than take the kick himself, İnan opted to leave it to Muslera. The keeper ran the length of the pitch and drove the ball right down the middle to get the first--and, so far, only--goal of his career.

The game also marked Muslera's sixteenth clean sheet, as the game ended 0-4 after a final goal from Milan Baroš in the 87th minute.