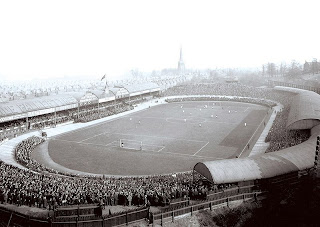 Their new home, originally named Aston Lower Grounds, was their third one, following Aston Park (1874-76) and Perry Barr (1876-97). It was formerly part of the Aston Hall estate of  Lord Thomas Holte, built on the location that used to be the kitchen garden, which had subsequently been converted into an amusement park and all-purpose sports ground. Villa signed a long-term lease to rent the ground for an annual fee of £300, then commissioned the construction of stands with a capacity of 40,000 people.

Construction was still ongoing when Villa played their first match there, a 3-0 win over Blackburn Rovers. It was a meaningless match for the hosts, who had already secured their second straight league title (and third overall) and had won the FA Cup. They didn't lose a game there until a defeat to Sheffield United in January 1898. Since then, Villa has won four more league titles there (1899, 1900, 1910, 1981).

The record attendance there is 76,588, set during a sixth-round FA Cup match against Derby County, while the record as an all-seater is 42,788, set during a league game against Liverpool in 2009.
Posted by Brian Seal at 12:01 AM