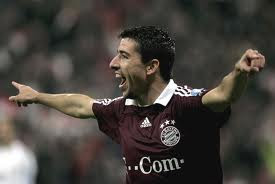 On 7 March 2007, Bayern Munich's Roy Makaay scored the Champions League's fastest goal when he netted against Real Madrid after only 10 seconds.

The match was the second leg of the Round of 16. Real Madrid won the first leg at the Bernabéu 3-2, but Bayern's two away goals would prove to be crucial.

Bayern hosted the second leg at the Allianz Arena, where a crowd of 69,500 turned out to watch Makaay's record goal. Real Madrid took the opening kick and quickly sent it back to left back Roberto Carlos, whose poor touch allowed Bayern's Hasan Salihamidžić to steal it away. He slipped behind the defensive line and centered the ball for Makaay, surging through the middle. The striker collected it and beat keeper Iker Casillas with a calm finish with just 10.12 seconds on the clock.

The goal crushed the previous record of 20.07 seconds, set by Arsenal's Gilberto Silva in a 2002 match against PSV Eindhoven.

The match ended 2-1 to Bayern after they got a second-half goal from Lucio (66') and Madrid got a late penalty from forward Ruud van Nistelrooy (83'). Even at 3-3 on aggregate, Bayern advanced on away goals (but lost to Milan in the quarterfinals).