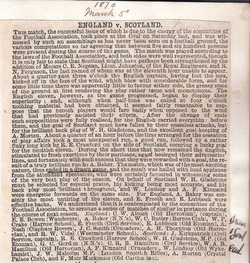 On 5 March 1870, London hosted the world's first international match, with an English team facing a group of London-based Scottish players. It ended in a 1-1 draw.

C.W. Alcock of Old Harrovians--FA Secretary and later founder of the FA Cup--organized the match as the first of a series of five showcases between the two countries and captained the English side. The Scottish eleven was chosen by Arthur Kinnaird and  captain James Kirkpatrick and also included Old Etonians' William Gladstone, whose father later became Prime Minister.

The teams met at the Oval, muddied from rain, and played through a scoreless first half. After the break, they switched sides, which a post-match report described as a newly-implemented rule. Late in the second half, Alcock moved his goalkeeper up the field, leaving an opening for Scotland's Robert Crawford to score the opening goal in the 75th minute. But Alfred Baker found the net for England in the 89th minute to earn a 1-1 draw.

Four more representative matches followed between November 1870 and February 1872, ending in one more draw and three wins for England. But because the Scottish teams for all five matches were drawn exclusively from London, FIFA does not recognize them as official internationals.
Posted by Brian Seal at 12:01 AM