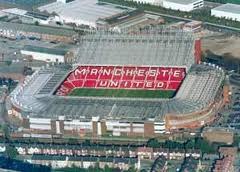 On 19 February 1910, Liverpool spoiled the debut of Manchester United's new stadium, winning there 3-4.

Originally named United Football Ground, the stadium was designed by architect Archibald Leitch and cost approximately £60,000 to complete. It opened with a capacity of 80,000--substantially higher than the 50,000 of their previous Bank Street ground--but only 45,000 people turned out for that opening match.

United's opponents were Liverpool, who had already beaten them at Anfield earlier in the season. They completed their sweep of the Red Devils with a 3-4 win thanks to a brace each from Arthur Goddard and James Stewart (United's scorers were Tom Homer, Sandy Turnbull, and George Wall).

Renamed Old Trafford in 1936, it has remained United's home ever since, except for a brief spell after World War II when bombing damage rendered it temporarily unusable. Its highest attendance, however, did not involve United; that was set at 76,962 for a 1939 FA Cup match between Wolverhampton Wanderers and Grimsby Town when Old Trafford was still a terraced stadium. The record after conversion to an all-seater is 76,098, set during a league game between United and Blackburn Rovers in 2007.