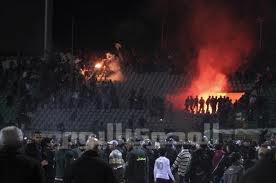 On 1 February 2012, 79 people died and over 1,000 were injured in an outbreak of violence following an Egyptian Premier League match.

The match, between Al-Ahly and Al-Masry at the latter's Port Said Stadium, was played in a charged atmosphere from the beginning, with supporters on the pitch forcing a thirty-minute delay to the opening kick-off. The hosts went on to win 3-1, with subsequent pitch invasions after every Al-Masry goal.

When the game ended, a group of Al-Masry supporters launched an attack on the Al-Ahly players and fans, using knives, clubs, and rocks. A total of 79 people died from a combination of stabbings, beatings, and stampede-related injuries. Another 1,000 people sustained injuries.

Afterward, many people claimed the riot was politically motivated, accusing the police and the armed forces of conspiring to punish the Al-Ahly supporters, who had been very critical of them in the wake of the previous year's Egyptian revolution.

Authorities arrested 73 people. Of those, 21 were tried and received death sentences in January 2013, which sparked another set of riots even more deadly than the first. Verdicts have not yet issued for the remaining 52 defendants.
Posted by Brian Seal at 12:01 AM