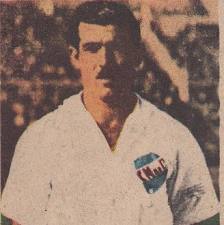 On 12 December 1973, Nacional legend Atilio García, the top scorer in the history of Uruguayan football, passed away at the age of 59.

Born in Buenos Aires in 1914, Garcia started his career with local club Platense (1936) and Boca Juniors (1937) before moving to Uruguay in 1938 to play for Nacional. He was the league's top scorer in his first season there with 20 goals and also won his first piece of silverware, the 1938 Torneo de Honor.

He repeated as top scorer for the next six seasons (1939-1944), then again in 1946 and won eight league titles before leaving the club in 1951. Overall, the club credits him with a Uruguayan record 486 goals across all competitions (though his Primera División tally of 208 goals in 210 games was later beaten by Peńarol's Fernando Morena, who scored 230 goals in 244 games between 1969 and 1985).

After leaving Nacional, García spent a season each with Racing Club de Montevideo and Miramar Misiones before retiring in 1953. He remained in Uruguay and was living in Montevideo at the time of his death. In his honor, Nacional named a stand after him in the Estadio Gran Parque Central.