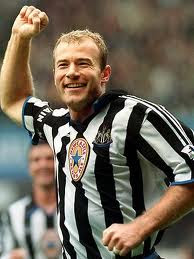 On 7 August 1999, Alan Shearer marked his 100th appearance for Newcastle by receiving the first red card of his career.

The striker joined Newcastle, his hometown club, in 1996 after five seasons at Southampton and four at Blackburn Rovers (with whom he won the Premier League in 1995) and had made 99 appearances for the club prior to the start of the 1999-2000 season. He had acquired the nickname "Mary Poppins" for his squeaky-clean public image, due in large part to the fact that he had never been sent off.

That changed in 1999. Newcastle were hosting Aston Villa in the season opener and the match remained scoreless deep into the second half. In the 70th minute, Shearer, who was already on a yellow card, battled Villa's Colin Calderwood for the ball, leaving the defender on the ground. Referee Uriah Rennie ruled that Shearer was guilty of "excessive use of the elbows" and showed the striker a second yellow, ejecting him from the match. Villa went on to win 0-1 with a 75th-minute goal from Julian Joachim.

Just over two years later, Shearer received a second red in a match against Charlton, but it was later rescinded.