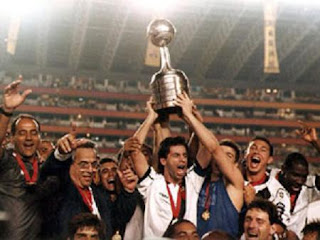 The two teams qualified for the competition by winning their domestic leagues--Brazil for Vasco and Ecuador for Barcelona--in 1997. Vasco had a more difficult road to the final, beating defending champions Cruzeiro in the Round of 16, then overcoming Grêmio and River Plate in the quarterfinals and semifinals, respectively. Barcelona, meanwhile, advanced over Colo-Colo, Bolívar, and Cerro Porteño.

The final was played over two legs, home and away, with the winner determined by points. Vasco won the first leg, played at the Estádio São Januário in Rio on 12 August, by the score of 2-0 with goals from their forward pairing of Donizete (7') and Luizáo (35').

In the second leg, played two weeks later at Barcelona's Estadio Monumental in Guayaquil, Vasco again went up by two at the break, with the same two players providing the goals, Luizáo striking in the 24th minute and Donizete in the 45th.

Barcelona halved the margin to one with a 79th-minute goal from forward Antony de Ávila, but they could get no closer, even after Donizete received a 93rd-minute red card to reduce Vasco to ten men.

It was Vasco's first appearance in the Copa Libertadores final, while Barcelona had been there once before, finishing as runners-up to Olimpia in 1990. Neither team has returned since.