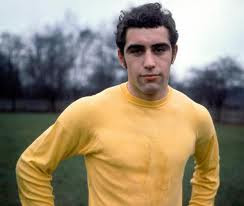 On 25 November 1970, England beat East Germany 3-1 in a friendly at Wembley Stadium. It was the debut for goalkeeper Peter Shilton who went on to become England's all-time appearances leader.

The 21-year old Shilton was a star for Leicester City, where he had displaced England World Cup-winning keeper Gordon Banks three years earlier. His performances for Leicester impressed Sir Alf Ramsey, who called him up for the match against East Germany.

He delivered a strong performance, surrendering only a 27th-minute goal to Eberhard Vogel, the 1969 East German Player of the Year. England, meanwhile, got goals from Francis Lee (12'), Martin Peters (21'), and Allan Clarke (63') en route to a comfortable win.

Injuries from a car accident ended Banks' career in 1972, with Shilton battling Liverpool keeper Ray Clemence to become the new England number one. The two split time for the next decade, though Shilton got the lion's share of appearances. By the time he retired in 1990, he had accumulated a total of 125, blowing past the previous record of 108 set by Bobby Moore (Moore's record was since passed by David Beckham with 115).
Posted by Brian Seal at 12:01 AM