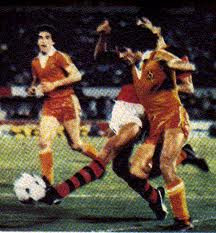 On 23 November 1981, Flamengo survived a battle of attrition with Cobreloa to win the Copa Libertadores in a replay that had two goals and five red cards.

The two teams split the first two legs of the final, with each holding serve at home. The second match, won by Cobreloa 1-0 in Santiago, was a heated affair that drew blood from one Flamengo player and saw another get stepped on while lying on the ground.

That set the tone for the replay, contested at the neutral location of Montevideo's Estadio Centenario. There, Flamengo playmaker Zico--who had scored both goals in their 2-1 victory in the first leg--again rose to the occasion with another brace. He scored his first goal from close range in the 18th minute, then doubled the lead with a 20-yard free kick in the 84th minute. In between, three players were ejected, one from Flamengo and two from Cobreloa.

With the title firmly in hand after Zico's second goal, Flamengo manager Paulo César Carpegiani sent in towering striker José Anselmo as an 86th minute substitute. Three minutes later, Anselmo received a red card of his own after punching Cobreloa defender Mario Soto in the face in what appeared to be a retaliation for Soto's violent play in the second leg. The referee ejected Soto in the 90th minute, making a total of five expulsions on the day.

The win qualified Flamengo for the 1981 Intercontinental Cup against European Cup champions Liverpool, with the Brazilians emerging as 0-3 victors.