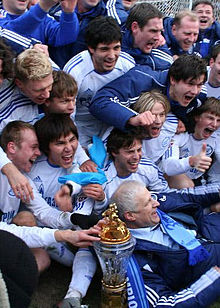 On 11 November 2007, Zenit St. Petersburg won their first Russian Premier League title with a win over Saturn Moscow Oblast on the last matchday of the season.

Founded in 1925, Zenit had won only one other league title in their history--the 1984 Soviet Top League. After the advent of the Russian Premier League in 1992, they were relegated after that first season, then returned to the top flight in 1996. A handful of top-10 finishes followed, as well as one season in which they finished third (2001) and one in second (2003).

The 2007 season was their first full one under new manager Dick Advocaat, who had taken over in July 2006. Despite losing both of their league meetings against Spartak Moscow, Zenit entered the last matchday two points clear of their rivals from the capital, knowing that a win would secure the title. But to get it, they needed an away victory over Saturn, with whom they had drawn 1-1 at home in the first week of the season.

Playing before a crowd of 16,500, Zenit looked to rely on their top goalscorers, forwards Andrey Arshavin and Pavel Pogrebnyak, with respective league totals that season of 10 and 11 goals, respectively. But they received a spark from a less likely source, as a 14th-minute shot from Zenit midfielder Radek Šírl deflected past Saturn goalkeeper Antonin Kinsky. It was the only goal of the match.

The win made Zenit the first team outside of Moscow to win the title since 1995. It also launched them into European competition that ended with them lifting both the UEFA Cup and the UEFA Super Cup in 2008.