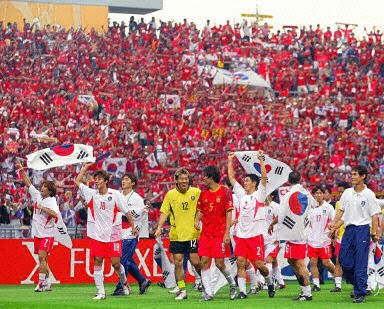 On 22 June 2002, co-hosts South Korea became the first Asian team to advance to the World Cup semifinals by beating Spain on penalties, 0-0 (3-5). Their win, however, came with a bit of controversy.

Spain dominated the first half, with 20-year old Betis midfielder Joaquín Sánchez providing a spark on the right side. But the South Korean defense proved stout and kept the match scoreless in the first half. Spain thought they cracked the Korean's back line mid-way through the second half when a Spanish free kick bounced into the net off the shoulder of Korean center back Kim Tae Young, but the referee disallowed the goal for an apparent foul.

In the second minute of extra time, Spain again thought they had the match-winner when Joaquín ran along the byline and chipped the ball into forward Fernando Morientes, who headed it into the goal. The referee disallowed that goal after the linesman signaled - incorrectly - that the ball had gone out of bounds before the pass.

In the ensuing shootout, Korea went first and were up 4-3 when Joaquín stepped up to the spot. But his shot was tame and easily saved by Korean keeper Lee Woon Jae. The final shot by Korean captain Hong Myung Bo then clinched the victory. South Korea advanced to the semifinals, where they lost to Germany 1-0.