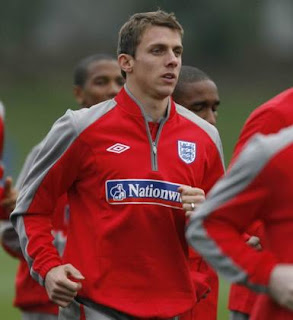 On 1 June 2008, 26-year old Blackburn Rovers left back Stephen Warnock made his first international appearance in England's 0-3 friendly win over Trinidad and Tobago at the Hasely Crawford Stadium in Port of Spain. To date, it remains his only cap and it lasted all of eight minutes, tying him with two other players for the shortest career of any English international.

Warnock was first called up for the national team by Sven-Göran Eriksson in 2005 while at Liverpool, but he never got off the bench. In 2008, new manager Fabio Capello named him to the squad for friendlies against the United States and Trinidad and Tobago. He finally took the pitch in the latter match, replacing Wayne Bridge in the 84th minute with England already up 0-3. There were two minutes of added time, raising his total time on the pitch to 8 minutes.

Two other players ended their international career for England at 8 minutes - West Ham's Jimmy Barrett, who came off injured in his one cap in 1928, and Brighton and Hove Albion's Peter Ward, who played the last 8 minutes of a 1980 match against Australia.

Warnock, who currently plays for Aston Villa, has a chance to separate himself from Barrett and Ward, as Capello named him to the 30-man provisional squad for the 2010 World Cup. Capello has to trim the side to the final 23 players today.

[2012 Update: Warnock made his second appearance for England in November 2010, playing the last 20 minutes of a friendly against France.]
Posted by Brian Seal at 12:01 AM