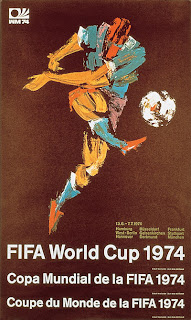 On 14 June 1974, hosts West Germany opened that year's World Cup with a 1-0 win over Chile before a crowd of 83,168 at the Olympiastadion in West Berlin. In addition to kicking off West Germany's second World Cup-winning campaign, the match also delivered the Cup's first-ever red card.

Even before it began, the tournament took on a political aspect, as several Eastern European nations qualified at the expense of higher-profile Western European sides such as England, France, and Spain. West Germany, who had won the Cup in 1954 and had recently finished in second place (1966) and third place (1970), became the standard-bearers for the West. That role was emphasized by the first match, hosted by West Germany in the enclave of West Berlin, surrounded on all sides by fellow qualifiers East Germany.

The West Germans quickly established their intentions, placing the South Americans under constant pressure. In the 18th minute, defender Paul Breitner gave the hosts the lead, blasting a shot into the top left corner of the net from over thirty yards away. Only some excellent work from Chilean keeper Leopoldo Vallejos prevented the scoreline from getting worse for his side.

In the 67th minute, Chilean midfielder Carlos Caszely, frustrated by challenge moments earlier by West German defender Berti Vogts, retaliated with a violent lunge from behind that sent Vogts to the ground and earned Caszely a straight red - the first red card issued in the history of the World Cup (red and yellow cards were introduced for the first time in the 1970 tournament, but nobody earned a red that year).

The West Germans held on for the 1-0 win on the way to their second World Cup title.