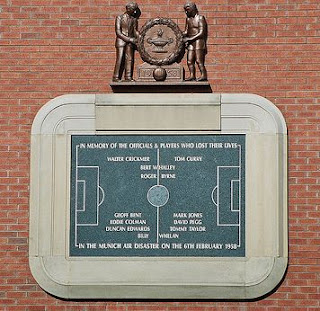 United were returning home from a 3-3 draw with Red Star Belgrade in the European Cup when their plane stopped in Munich to refuel. As the flight crew prepared to take off, they were twice forced to cancel the departure due to engine trouble. Meanwhile, heavy snow caused slush to build up at the end of the runway. During the third attempt, the plane committed to take-off, reaching a speed at which it was no longer possible to stop safely. But it hit the slush at the end of the runway, which dropped the plane's speed below the level needed to get airborne.
Unable to stop, the plane crashed through a fence and broke apart, with portions of the fuselage hitting a house, a tree, and a fuel shed, causing the latter to explode. Twenty passengers died instantly, while Captain James Thain and United goalkeeper Harry Gregg both helped clear survivors from the flaming wreckage--Gregg literally dragged teammates Bobby Charlton and Dennis Viollet to safety by their belts.
Reporter Frank Swift died on the way to the hospital, while co-pilot Kenneth Rayment passed away after three weeks in intensive care. United's star wing half, Duncan Edwards--who had finished third in voting for 1957 European Footballer of the Year--died after two weeks in the hospital. United Manager Matt Busby's injuries were so bad that he received last rites while in the hospital, but he survived and returned the lead the team again the next season.
The club came close to folding after the devastation of Munich, but Busby managed to rebuild the team and led them to the European title 10 years later. Two members of that title-winning team, Bobby Charlton and Bill Foulkes, were survivors of the Munich crash.