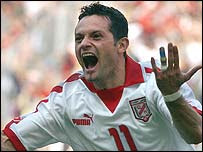 On 14 February 2004, Tunisia gave their home supporters a deserved gift by winning the country's first African Cup of Nations trophy, beating Morocco 2-1 at Tunisia's largest stadium, Stade 7 Novembre in the city of Radès.

The 2004 tournament was Tunisia's third as hosts; in 1965, the Eagles of Carthage had finished as runners-up to Ghana, while in 1994, they were eliminated in the group stage. They started the 2004 edition in strong fashion, winning their group ahead of Guinea, Rwanda, and the Democratic Republic of the Congo. The highlight of the group stage was Tunisia's 3-0 win over the Congo DR--the only match in the tournament Tunisia won by more than a single goal.

In the knockout rounds, they slipped past Senegal in the quarterfinals, 1-0, before going to penalty kicks against Nigeria in the semis. Drawn at 1-1 at the end of extra time thanks to offsetting penalty kicks, each of Tunisia's five kickers converted their chances in the shootout, while Nigerian striker Osaze Odemwingie missed his.
In the Final against Morocco, Tunisia jumped ahead quickly with a 5th-minute goal from striker Francileudo dos Santos (pictured). Morocco got a 38th-minute equalizer from midfielder Youssef Mokhtari, before striker Ziad Jaziri netted the matchwinner in the 52nd minute. Dos Santos' goal was his fourth of the tournament, tying him with four others for golden boot honors. He his currently Tunisia's top scorer, with 22 goals in 40 appearances.
Tunisia has not yet been able to replicate their 2004 success, advancing no farther than the quarterfinals in the last three tournaments.