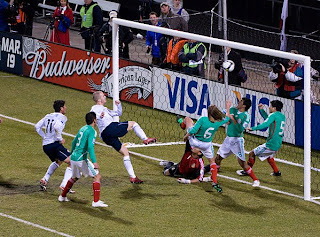 On 11 February 2009, the United States defeated Mexico at Crew Stadium in Colombus Ohio. It was the Yanks' third straight 2-0 win in Columbus over their North American rivals, prompting cheers of "dos a cero" among the American supporters in the crowd of 23,776.

It was the opening match for CONCACAF's fourth and final 2010 World Cup qualifying round, also known as "the hexagonal," which includes the three group winners and runners-up from the previous round. The United States easily won their third-round group, while Mexico squeaked into the fourth round as their group runner-up, tied on points but with a better goal differential than group third-place finisher Jamaica.

After some tentative play by both sides, the United States took a late first-half lead when Mexico keeper Oswaldo Sánchez parried a header into the path of US midfielder Michael Bradley, who tucked it away from 6 yards out. Play heated up in the second half, with Mexican captain Rafael Márquez getting sent off in the 65th minute for a high kick on American keeper Tim Howard.

With El Tri down to 10 men and struggling, the US dominated the remainder of the match. They eventually capped their victory with another goal from Bradley, who, in the second minute of stoppage time, fired a 28-yard shot under the arms of Sánchez to complete his brace.

The loss helped seal the fate of Mexico coach Sven-Göran Eriksson, who was sacked in April 2009 after less than a year in charge. Under new coach Javier Aguirre, Mexico succesfully qualified for the World Cup in second place of the CONCACAF table, one point behind the US.