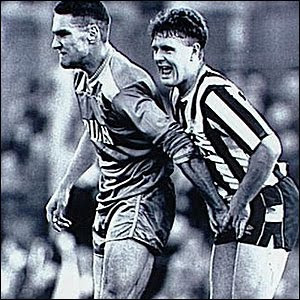 Jones started his footballing career in 1984 with non-league Wealdstone and spent a season in Sweden before moving to Wimbledon in 1986. There, he was part of the rambunctious "Crazy Gang" that won the 1988 FA Cup, the club's highest achievement. He moved to Leeds the following year, starting a journey that included stints at Sheffield United and Chelsea before returning to Wimbledon in 1992.

He earned a reputation as one of the game's great hard men, getting sent off 12 times in his career. His most notorious incident occurred in a match against Newcastle in 1987 when Jones unnerved Paul Gascoigne by squeezing the young midfielder's testicles. The image was caught on film and became an iconic representation of Jones' style of play.

After leaving Wimbledon again in 1998, he served nine matches as player/manager of QPR before retiring. By that time, his film career was underway, starting with his breakout role as hard man "Big Chris" in Guy Ritchie's 1998 film Lock, Stock, and Two Smoking Barrels.

Despite his ongoing success as an actor, Jones continues to play football for Hollywood United and has expressed a desire to return to Leeds some day.
Posted by Brian Seal at 12:01 AM