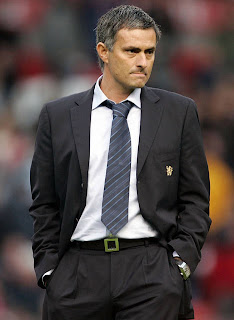 On 26 January 1963, celebrated manager and self-annointed "Special One" José Mourinho was born in Setúbal, Portugal.

After a brief and undistinguished career as a footballer in his native Portugal, Mourinho turned to management, where he enjoyed quick success. He got his first break in 1992 as translator for Bobby Robson, then at Sporting in Lisbon. After spells as an assistant at Porto and Barcelona, and brief periods in charge at Benfica and Leiria, Mourinho moved to Porto in 2002 where he became an international name.
Under Mourinho, Porto won the 2004 Champions League, beating Monaco 3-0 in the Final. In June 2004, Mourinho moved to Chelsea where, in his first press conference, he announced that he thought he was "a special one." He backed up the statement by winning the Premier League title in his first season, Chelsea's first title in 50 years. They repeated as champions in Mourinho's second season.
After winning the FA Cup in May 2007, Mourinho suddenly resigned shortly after the start of the following season amid conflicts with Chelsea owner Roman Abramovich over staffing decisions and player purchases. He took the year off from football, then joined Inter in June 2008, winning the Serie A title in his first season in Italy.
Mourinho is closing in on a remarkable run of eight years without a home loss. His last defeat at home was on 23 February 2002, when Porto lost 3-2 to Beira-Mar.