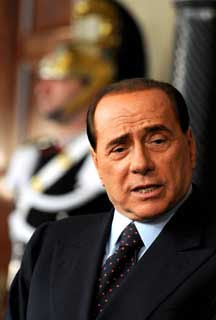 He purchased AC Milan in 1986, during a lean period in the club's history. He invested in a new manager - Arrigo Sacchi - and new players, including the Dutch trio of Marco van Basten, Frank Rijkaard, and Ruud Gullit, as well as Franco Baresi and Paolo Maldini, two of the greatest defenders in Italian football. By 1988, Milan won the Serie A title, which it followed with European Cup trophies in 1989 and 1990.

Berlusconi relied heavily on the club's regained popularity to generate support among Italian voters. Launched in December 1993, only three months prior to the general election, Forza Italia was a center-right coalition that used Italy's ultra football supporter groups as a model. Even the name "Forza Italia" comes from the chant used by supporters of the Italian national team during matches (translated into English as "Forward, Italy").

Berlusconi's term in office lasted only two years, but he served a second term from 2001-2006, and started a third term in 2008, which is still running. He is now the second-longest serving Prime Minister in Italian history, despite often being the subject of controversy.

Image copyrighted 2008 by Presidenza della Repubblica and used with permission.
Posted by Brian Seal at 9:20 AM