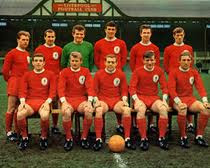 On 25 November 1964, Liverpool played for the first time in the all-red kit that has since become the club's trademark.

Founded in 1892, Liverpool initially adopted blue and white as their colors. But four years later, they exchanged those colors for a combination of red shirts and white shorts (usually paired with red socks). That scheme remained their home kit until 1964, when manager Bill Shankly proposed the idea of a more intimidating all-red uniform.

According to club legend, Ron Yeats was the first player to model the new colors for Shankly, who reportedly responded by saying "Jesus Christ, son. You look bloody massive. You'll scare them to death."

Liverpool first wore the new home colors in a second-round European Cup match against Anderlecht. And while it's not clear whether they played a psychological effect on the Belgians, Liverpool ran out 3-0 winners on the day with goals from Ian St. John (10'), Roger Hunt (43'), and Yeats (50'). They went on to win the second leg as well and eventually reached the semifinals before falling to Inter Milan.

The club switched to all-red for the start of the 1965-66 season and has worn those colors ever since.