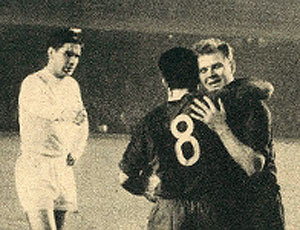 On 23 November 1960, Real Madrid were eliminated from the European Cup for the first time in history. By rivals Barcelona.

Real Madrid had won all five previous tournaments starting with the 1954-55 edition. Barcelona, meanwhile, had, to that point, participated only once, getting eliminated by Real Madrid in the semi-finals the previous season. They did earn a measure of revenge over Madrid by winning La Liga that spring (Madrid finished as runners-up), but were still eager to knock Madrid off their European perch.

They met in the first round, with Real Madrid hosting the first leg on 9 November. There, a penalty from Luis Suárez in the 88th minute earned Barcelona a 2-2 draw with the 5-time defending champions.

Two weeks later, the teams met at Camp Nou for the second leg where Barcelona took a two-goal lead deep into the second half after getting goals from Martí Vergés (33') and Evaristo de Marcedo (81'). Madrid forward Canário scored in the 87th minute to set up a tense finish, but it was the visitors' only goal of the day and they fell 4-3 on aggregate.

Barcelona eventually reached the final, but lost there to Benfica, 3-2. They finally won it in 1992 and have since lifted the trophy three more times. Real Madrid, meanwhile, won it again in 1966 and have since extended their collection of European Cups/Champions League trophies to nine.