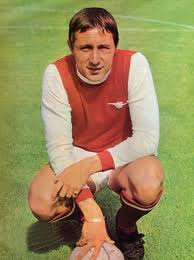 On 2 January 1965, Arsenal forward John Radford became the club's youngest player to score a hat-trick when he put three past Wolves just under two months short of his 18th birthday.

Radford came up through the Arsenal youth system, joining them in 1962 at the age of 15. Two years later, he signed a professional contract, then made his first-team debut that March. It was his only appearance of the 1963-64 season, but he featured more the following season, leading up to his record-breaking performance against Wolves at the age of 17 years and 315 days.

He was a key component of the club's Double-winning 1970-71 season, scoring 21 league goals as Arsenal claimed the title and providing the assists for both goals in their 2-1 win over Liverpool in that season's FA Cup final. He also helped them win the 1969-70 Inter-Cities Fairs Cup.

Radford remained with Arsenal until 1976, having scored 149 goals--enough to take second place on the club's all-time scorer list at the time, behind Cliff Bastin (178), though they have since been overtaken by Ian Wright (185) and Thierry Henry (226).