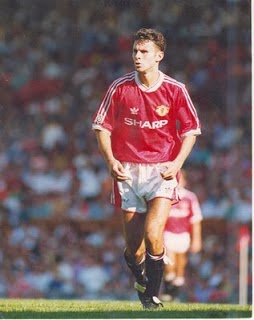 On 2 March 1991, 17-year old midfielder Ryan Giggs made his first appearance for Manchester United in a 2-0 home league loss to Everton. Although he played in only one other match that season, the young Welsh left winger would later become United's appearances leader on his way to becoming the most decorated player in English football history.

Born in Cardiff, Wales, Giggs moved with his family to Salford, Greater Manchester, in 1980. He started his career as a youth player with Manchester City in 1985 before moving to United's youth program in 1987. He turned professional on his 17th birthday, 29 November 1990. For his first appearance against Everton, Giggs came on as a substitute, replacing fullback Denis Irwin. His other appearance that season was a 1-0 over Manchester City on 4 May, in which Giggs started and scored the matchwinner - his first goal for United.


He became a regular starter in the 1991-92 season, helping lead the club to a second-place League finish and the League Cup title, his first piece of silverware. Since then, he has added 13 League titles, four FA Cup trophies, two more League Cup trophies, seven Community Shields, and two UEFA Champions League trophies to his silverware cabinet, as well as one Super Cup title, one Intercontinental Cup trophy, and one Club World Cup trophy.


In 2008, Giggs memorably broke Bobby Charlton's previous record of 758 Manchester United appearances by coming on as an 87th-minute substitute in the Champions League Final against Chelsea and scoring the winning goal in the penalty shootout. Giggs is still playing for United and has made more than 950 total appearances.