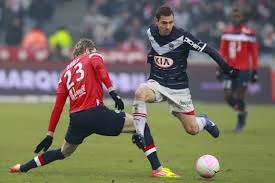 On 12 February 2012, defending Ligue 1 champions Lille battled back from a 1-4 deficit against Bordeaux only to lose 4-5 to a stoppage-time goal from a former player.

At the time, Lille were chasing the top spot, sitting in third, ten points behind co-leaders Montpellier and Paris Saint-Germain (though the former had played two games more than Lille and the latter had played one more). Bordeaux, meanwhile, were back in ninth when they visited the Stadium Lille Métropole, but had drawn 1-1 with Lille at home in September.

It took just under two minutes for Bordeaux to take the lead with a goal from midfielder Nicolas Maurice-Belay, but Lille defender David Rozehnal equalized in the eighth minute. Nine minutes later, Bordeaux pulled back ahead with a goal from Ludovic Obraniak, who had joined them from Lille just one month earlier. By the hour mark, they had extended their lead to 1-4 with goals from Maurice-Belay (50') and Yoan Gouffran (60').

Lille stormed back in the final thirty minutes with strikes from Eden Hazard (65'), Mathieu Debuchy (75'), and Nolan Roux (90') to claim what looked to be a near-certain point. But Obraniak scored again in the third minute of stoppage time to steal the victory for his new team.

Bordeaux went on to finish the season in fifth place, while Lille remained third in the final table.


Lille-Bordeaux 4-5, tous les buts by ChezLesGirondins
Posted by Brian Seal at 12:01 AM