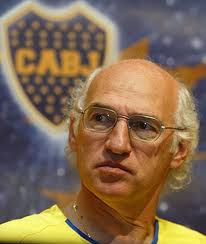 On 5 May 1998, Boca Juniors beat Huracán 2-4. It was the first of their Argentinian record forty-match unbeaten streak that included two league titles.

The run coincided with the arrival of manager Carlos Bianchi (pictured), who had won three league titles and the Copa Libertadores as the boss of Vélez Sársfield from 1993 to 1996 and had just spent a brief spell in charge of Roma.

Boca struggled in Bianchi's first season, the 1998 Clausura. The win over Huracán came in the fifteenth match of the season and Boca followed it with three more wins and a draw to finish in the table's sixth spot. But they continued their unbeaten run in the next season, the 1998 Apertura, to finish as undefeated champions with a record of thirteen wins and six draws.

The streak continued for another sixteen matches in the 1999 Clausura before Boca lost to Independiente 4-0 on 6 June 1999. The overall record of forty unbeaten matches beat the previous high mark of thirty-nine set by Racing in 1965-66 and also helped Boca claim the Clausura title to repeat as champions.

Although the streak stopped at forty, Bianchi continued to enjoy success at Boca, winning one more league title, two Copa Libertadores trophies, and one Intercontinental Cup before his departure in 2001. He then returned in 2003 and added another league title, another Copa Libertadores trophy, and another Intercontinental Cup before leaving again in 2005.
Posted by Brian Seal at 12:01 AM