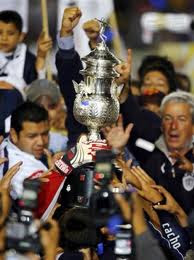 On 27 May 2007, Pachuca won their fifth Primera División title, beating América 3-2 on aggregate in the Clausura final.

Pachuca had a slightly easier road to the final than América; their semifinal opponent, Cruz Azul, whom they had beaten 3-1 in the first leg, was suspended for the second leg by the FMF for fielding an ineligible player. So Pachuca enjoyed some additional rest while América completed their semifinal victory over Guadalajara.

In the final, Pachuca hosted the first leg and won 2-1, with both of their goals coming from Juan Carlos Cacho. But in the second leg, América drew level on aggregate with a 69th-minute free kick from Cuauhtémoc Blanco. Then, with time winding down, Pachuca sent the ball into a crowded box where it somehow found its way through several América defenders to Cacho, who tapped in the winner.

It was another victory in a tremendous eighteen-month period for Pachuca, who had already won that year's CONCACAF Champions League to go along with the previous season's Clausura and Copa Sudamericana and would go on to win the 2007 North American Superliga.