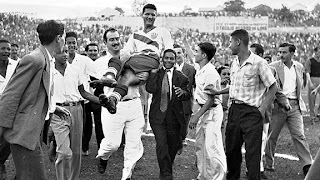 On 19 March 1924, Joe Gaetjens, who scored one of the most memorable goals in the history of the United States national team, was born in Port-au-Prince, Haiti.

Born to a prominent family--one great-grandfather was sent to Haiti on a mission by the king of Prussia and another was a general involved in Haiti's fight for independence--Gaetjens started his career with L'Etoile Hatienne, where he won championships in 1942 and 1944. But in 1947, the then-23-year old forward moved to New York to study accounting at Columbia University.

While there, he continued to play football for American Soccer League club Brookhattan, owned by Eugene Diaz, and supplemented his pay by washing dishes at Diaz's Harlem cafe. Gaetjens was the ASL's top scorer in 1950, which led to his inclusion on the US roster for the 1950 World Cup in Brazil. (He was eligible under the rules at the time, which required only that players had signed a paper expressing their intent to apply for citizenship, which Gaetjens had done.) There, after an opening 3-1 loss to Spain, Gaetjens scored with a diving header to beat England 1-0, one of the greatest upsets in World Cup history.

Afterward, he played briefly in France, including a short spell with Racing Club de Paris, then returned to Haiti and made a solitary appearance for the Haitian national team in 1953. He started a dry cleaning business and coached youth football until 1964, when, due to political activities of his younger brothers, he was imprisoned upon the orders of Haitian president François "Papa Doc" Duvalier. He was never seen in public again and his death remains a subject of speculation.