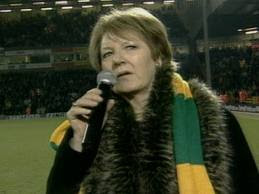 On 28 February 2005, Manchester City beat Norwich in a match best remembered for a halftime call to action by Norwich owner Delia Smith.

In their first Premier League season since 1995, Norwich were struggling and looked likely to return to the second tier. By the time they hosted Manchester City at Carrow Road in February, they had dropped down into the table's twentieth spot, having won only three of their 27 matches. So it was a bit of a shock when Norwich surged to an early 2-0 lead with goals from Dean Ashton (12') and Leon McKenzie (16'). But they could not hold the lead, conceding twice before the break, one each to Antoine Sibierski (25') and Robbie Fowler (37').

With the two teams level at half time, Norwich majority shareholder and celebrity chef Delia Smith took a microphone and tried to inspire the home supporters, saying she had "a message for the best football supporters in the world. We need a twelfth man here. Where are you? Where are you? Let's be having you! Come on!"

Smith's outburst drew mixed criticism, with some applauding her devotion to the club and others claiming her behavior was undignified. In any event, her exhortation had little effect, as Norwich conceded another Fowler goal in the 90th minute and lost 2-3.

They were relegated at the end of the season, but returned to the Premier League in 2011.