1 February 1958 - Will The Real Luther Blissett Please Stand Up 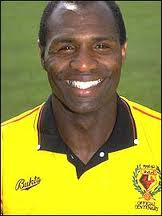 On 1 February 1958, Luther Blissett, who holds the Watford records for appearances and goals, was born in Jamaica.

The striker, who moved to England at a young age, joined Watford's youth team in 1974, then signed a professional contract with the Fourth Division side one year later. His first two seasons were unremarkable, but he began scoring at a rapid pace in the 1977-78 season and helped Watford climb the league table all the way to the First Division by 1982. That season in the top flight--the club's first--was Blissett's best with a total of 27 goals in 41 appearances.

His performance caught the eye of Italian giants AC Milan, who signed him in June 1983 for £1M. But his form remained in England and he scored only six times in 39 appearances across all competitions before Milan sold him back to Watford for £550,000 in the summer of 1984. He remained there for another four years, then moved to Bournemouth for three seasons before returning to Watford for a third and final time. By the time he left again in 1992, he had set club records for appearances (503) and goals (183).

He retired 1994 after brief spells with Bury and Mansfield Town and also made a total of 14 appearances for England.

In 1994, a group of political and cultural activists in Italy adopted Blissett's name as a collective pseudonym for a series of pranks, saying "anyone can be Luther Blissett simply by adopting the name Luther Blissett." Use of the name quickly spread across Europe and the United States and was attached to a variety of activities, including one novel written under Blissett's name. The real Luther Blissett joked about participating, but is not actually a part of the project.