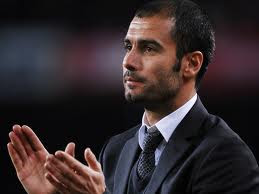 On 18 January 1971, former Barcelona player and current manager Pep Guardiola was born in the Catalonian town of Santpedor.

Guardiola first joined Barcelona in 1983 as a 12-year old member of their famed La Masia youth academy. He signed a professional contract with the club in 1990 and, later that year, then-manager Johan Cruyff called him up to the first team. Playing a central role as a defensive midfielder, Guardiola proceeded to collect a number of honors, including six league titles between 1991 and 1999 and the 1992 European Cup.

As manager, Guardiola emphasized the possession-based total football concept promoted by his own former manager, Cruyff. It paid immediate dividends, as Barcelona won the league in Guardiola's first season back, then proceeded to win the next two. Now in his fourth season in charge, he has won a record total of 13 trophies, including two Champions League titles and two Club World Cups. Most recently, he collected a personal highlight, winning the 2011 Ballon d'Or for Best Coach.