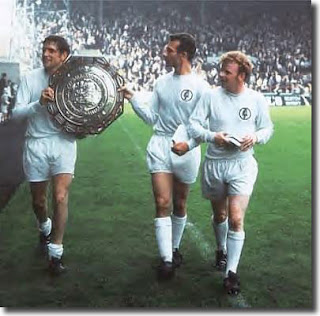 On 2 August 1969, Leeds United continued their remarkable run of success under manager Don Revie, winning the Charity Shield over Manchester City. Although the final score was 2-1, the match was not as close as that narrow margin suggests.

Don Revie had taken charge of Leeds as their player-manager in 1961, with the club in the Second Division. Under his guidance, they earned promotion to the top flight in 1964. By 1968, they won their first major honors, taking both the Inter-Cities Fairs Cup and the League Cup that year. They followed that performance by winning the First Division title in 1969, which sent them to the Charity Shield against the 1969 FA Cup winners, Manchester City.

Despite their recent success, Revie sought to strengthen the side that summer by signing Allan Clarke from Leicester City for the then-record British transfer fee of £165,000. The Charity Shield, played at Leeds' Elland Road stadium, was his first match for his new club and the striker promptly established himself as a scoring threat, striking the bar early and forcing a couple of impressive saves from the City keeper.

The match remained scoreless at the break, but after the restart, Leeds scored twice in quick succession with goals from Eddie Gray (55') and Jack Charlton (58'). The rapid change deflated the City side, who nevertheless managed a consolation goal in the 90th minute from Colin Bell.

The Charity Shield turned out to be Leeds' only silverware that season, though they came close to winning more. They finished as runners-up in both the league and the FA Cup, and as semifinalists in the European Cup.