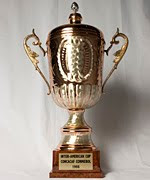 Since 1968, the Copa Interamericana had matched the winners of South America's Copa Libertadores against the CONCACAF Champions Cup holder, though the tournament was not played every year. The 1998 edition featured a match-up unique in the Cup's history, pairing the tournament's first Brazilian team--Vasco da Gama--against its first US side--DC United.

Vasco won the first leg, played at DC's RFK Stadium in November, with a solitary goal from midfielder Felipe. Although Vasco were the ostensible hosts for the second leg, it was played at Lockhart Stadium in Fort Lauderdale, Florida. Vasco arrived having just lost 2-1 to Real Madrid in the Intercontinental Cup four days earlier.

The match was scrappy, with the referee issuing yellow cards to players from both sides within the first 15 minutes. DC drew level on aggregate with a 34th-minute strike from midfielder Tony Sanneh. Vasco manager Antônio Lopes made some drastic changes at halftime, withdrawing midfielder Juninho and forward Luizão for substitutes Guilherme and Vitor, but it was DC who moved ahead with a goal from defender Eddie Pope in the 77th minute.

That was the last Copa Interamericana, as CONCACAF teams started competing in CONMEBOL competitions, making the tournament redundant.