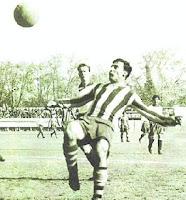 On 17 March 1954, Spain and Turkey met in Rome for a World Cup qualifying play-off, having split their two previous matches with one win apiece. With a World Cup trip at stake, the teams battled to a 2-2 draw through extra time, so the winner was decided by a coin toss.

There were 13 qualifying groups for the 1954 World Cup, with four of them -- including Spain's and Turkey's Group 6 -- having only two teams. In those groups, the teams played each other twice, once home and once away, earning two points for a win and one point for a draw. The group winners qualified for the Cup, while the runners-up went home.

The two sides first met in Madrid on 6 January 1954, with the hosts cruising to an easy 4-1 victory. In the second match, played in Istanbul on 14 March, the Turkish defense performed better, holding the Spanish scoreless in Turkey's 1-0 win. Unfortunately for Spain, the rules at the time did not consider goal differential, so a replay was required to decide the outcome.

FIFA scheduled the replay for 17 March, choosing Rome as a neutral ground. Spain took the lead with an 18th-minute goal from forward José Luis Arteche, but Turkey got a 32nd-minute equalizer from forward Burhan Sargin (pictured), who had scored the crucial goal in Istanbul. Sargin's fellow forward Suat Mamat then scored in the 65th minute to give the Turks a late lead. There was still time for Spain to rally, however, and forward Adrián Escudero brought his side level in the 79th minute. They played to a stalemate for the rest of regulation, then through extra time.

With no penalty-kick provision in place at the time, the winner was decided by chance. Some reports say that the winner was chosen by drawing lots, but FIFA says "their fate was decided by the toss of a coin, with the Turks calling correctly." In any event, the result was the same: the Spanish, despite outscoring their opponents 6-4 over the course of three matches, were sent home and Turkey advanced to the World Cup, where they were eliminated in the group stage.
Posted by Brian Seal at 12:01 AM