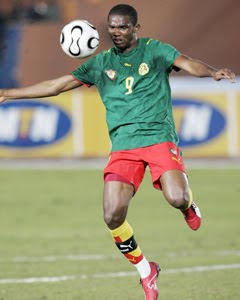 On 10 March 1981, Barcelona star and Cameroon international Samuel Eto'o was born in Nkon, Cameroon. He currently holds the record for most appearances in La Liga by an African player.

Although most closely associated with Barcelona, Eto'o got his professional start for Barça's fierce rivals Real Madrid, signing for them in 1997. But he failed to make an impact in the Spanish capital and spent most of his time on loan with Leganés, Espanyol, and Mallorca between 1997 and 2000. In 2000, he signed a permanent deal with Mallorca and spent an additional four successful seasons there, along the way winning the 2003 Copa del Rey. He did so well at Mallorca that Real wanted to re-sign him in 2004, but he left instead for Barcelona.

His time at Barcelona was very successful, with three league titles (2005, 2006, 2009) and two Champions League trophies (2006, 2009). On 4 May 2008, he made his 242nd La Liga appearance, breaking the record for most league appearances by an African player. By the time he left Barcelona in the summer of 2009, he had raised that number to 3o9.
Eto'o has also been successful for Cameroon, helping them win the 2000 and 2002 African Cup of Nations, as well as the 2008 Olympic gold medal. He is the all-time top scorer for the Indomitable Lions, notching 44 goals in 94 appearances.
He currently plays for Inter, having moved to the Milanese club in 2009 as part of a deal that sent Inter's Swedish striker Zlatan Ibrahimovich to Barcelona.
[2012 Update: Eto'o left Inter in 2011 for Russian club Anzhi Makhachkala, who gave him a salary of approximately €20M per season, making him the world's highest-paid footballer.]
Posted by Brian Seal at 12:01 AM