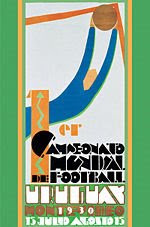 The first World Cup was open to all FIFA members, with no qualification necessary. Due to the distance and travel expense, few European teams were willing to participate, though FIFA President Jules Rimet ultimately persuaded Belgium, France, Romania, and Yugoslavia to make the trip. They were joined by nine Western Hemisphere teams; Argentina, Bolivia, Brazil, Chile, Mexico, Paraguay, Peru, the United States and hosts Uruguay.

France's inside right Lucien Laurent scored the World Cup's first ever goal with a volley against Mexico in the 19th minute. Marcel Langiller added a second in the 40th minute, followed by André Machinot in the 43rd minute. Mexico's Juan Carreño pulled one back in the 70th minute, but Machinot scored his second in the 87th minute, sealing the 4-1 victory. France completed its group stage with losses to Argentina and Chile, however, and was eliminated from the tournament.

In the other opening match, the United States' Scottish-born forward Bart McGhee scored a quick brace with goals in the 41st and 45th minutes. His fellow forward Bert Patenaude scored the third goal in the 88th minute, while goalkeeper Jimmy Douglas kept a clean sheet. The US finished at the top of its three-team group with a similar 3-0 win over Paraguay, then lost to Argentina 6-1 in the semi-finals to finish in third place overall.

Uruguay claimed the first World Cup trophy with a 4-2 win over Argentina in the Final.
Posted by Brian Seal at 12:01 AM