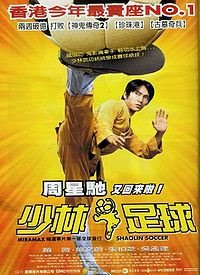 On 12 July 2001, the comedy film Shaolin Soccer was released in Hong Kong.

Written and directed by Hong Kong native Stephen Chow, who also stars as striker "Mighty Steel Leg" Sing, the film tells the story of a group of six brothers with superhuman abilities and martial arts skills who band together to form a football team called Team Shaolin. They enter the Chinese professional football league and advance to the final of the China Super Cup, where they face off against Team Evil. The members of Team Evil also have supernatural powers, so the Final becomes an epic battle of good against evil.

China banned the film for a year, reportedly over concerns about the name being offensive to Buddhists by placing the word "soccer" next to "Shaolin." Other reports, however, indicated that the film was banned because Chow did not await proper certification from Chinese authorities before releasing the film in Hong Kong.