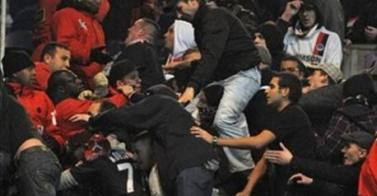 On 28 February 2010, rival groups of PSG supporters turned violent during a match against Marseille, resulting in twenty arrests and one fatality.

PSG hosted the Ligue 1 match looking for some redemption, having already lost at Marseille earlier in the season. But Marseille winger Hatem Ben Arfa was the first to score, driving the ball home in the 15th minute. The game remained close into the second half, but the visitors got additional goals from Lucho González (54') and Benoît Cheyrou (71') to finish the day at 0-3.

The day was even uglier for PSG in the stands and outside the Parc des Princes, where rival supporter groups the Boulogne Boys and Supras Auteuil clashed before, during, and after the game. The police used tear gas to help quell the riot and ended up arresting twenty people. Several people sustained minor injuries, but one, a 38-year old man identified only as "Yann L," suffered a serious head injury that put him into a coma. He died about two weeks later.

PSG condemned the actions and decided not to sell tickets for their away matches for the remainder of the season.